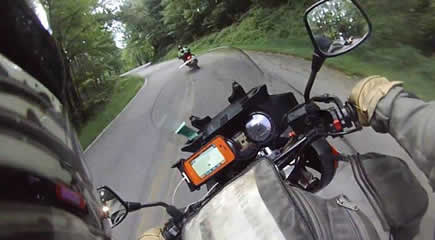 You don’t need to go with the crowds to the Blue Ridge Parkway or “Ride the Dragon” to experience some of the best roads in the entire country.  There are dozens of scenic backroads and highways that are perfect for motorcycling or driving in Western North Carolina and Eastern Tennessee.  From Highway 209 to the Dixie Highway, Hot Springs is a great location to begin or end your drive or motorcycle ride in the scenic beauty of the Blue Ridge and Smoky Mountains.

Appalachian Medley (aka The Rattler)

The Appalachian Medley byway engages the senses and recalls the past. It has been appropriately named for the rich history of local music, which is illustrated by the rise and fall of the beautiful hills along the byway — a melody of greatest proportions.

The byway begins on N.C. 209 at Exit 24 on I-40 near Lake Junaluska and Waynesville. Begin following the route by traveling north along N.C. 209. After 1.3 miles, the byway crosses the Pigeon River, which derives its name from the large flocks of pigeons that once lived along its banks. After crossing the river, continue two miles to Crabtree. Beginning a half mile after Crabtree, the byway is closely bordered by the Pisgah National Forest. This forest covers 12 counties and more than one million acres in North Carolina. Also, it is the birthplace of the scientific study of American forestry.

Five miles from Crabtree, the byway veers right near Fines Creek. The creek was named for a scout who was buried in its icy waters. The scout’s brother placed his body in the creek to preserve it until the spring thaw. However, when the brother came to retrieve the body, it was nowhere to be found. The byway enters Madison County at Betsy’s Gap four miles after crossing Fines Creek. Hebo Mountain can be seen to the south and Pug Knob to the north.

The byway, from this point north, is escorted by Spring Creek. The community of Luck is less than five miles up the road, and as the locals say, “with Luck comes Trust.” Trust, a small community with a general store and cafe, is 1.5 miles past Luck. Guests are welcome to stop in St. Jude’s Chapel of Hope. 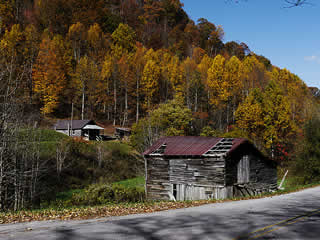 Following N.C. 209, the surrounding landscape opens into a picturesque valley. Max Patch is on the left. The Appalachian Trail lies across the top of this mountain bald. Travel a little more than four miles to the Rocky Bluff Recreation Area, which has picnic facilities, restrooms, campsites and hiking trails.

Hot Springs is about three miles beyond the recreation area. Two scouts, Henry Reynolds and Thomas Morgan, first discovered the springs in 1778. Originally known as Warm Springs (changed to Hot Springs in 1886), it was a main stop for drovers that led cattle, hogs and horses to markets in South Carolina and Georgia. In those days, the area had a rough reputation and was known for lawlessness. Toll roads with regular stagecoach traffic and private carriages slowly changed the character of towns such as Hot Springs, and the drovers’ stands were converted to accommodate a higher clientele seeking the healing waters of the springs. The history of this area also includes the first golf course in the Southeast, the imprisonment of German merchant sailors during World War I and the development of the Appalachian Trail. While in Hot Springs, take a side trip on Paint Rock Road (S.R. 1300). This leads to the area’s best known landmark, Paint Rock, a sheer rock cliff on which early settlers found painted images of humans and wild animals.

Turn onto U.S. 25/70 and travel three miles outside of Hot Springs where the Appalachian Trail crosses the road via an overhead bridge. Then, follow U.S. 25/70 to Walnut, once called Jewell Hill before it was incorporated in 1905. The byway ends here, but motorists may continue south to Marshall and the intersection of the French Broad Overview byway.

The French Broad Overview begins just north of Asheville in Weaverville, first settled in the 1700s. This small town was called Pine Cabin until its incorporation in 1850. It is also the site of the Vance Birthplace State Historic Site.  Zebulon B. Vance was North Carolina’s Civil War governor from 1862–1865. He also served in the U.S. Senate and U.S. House of Representatives. In addition to information about Vance, the historic site offers presentations on early mountain settler life.

Begin following the byway by taking I-26 West from Asheville to Exit 19 in Weaverville. From the interchange, take the U.S. 25/70 Bypass toward Marshall. Turn left at the first stoplight onto Monticello Road (S.R. 1727). 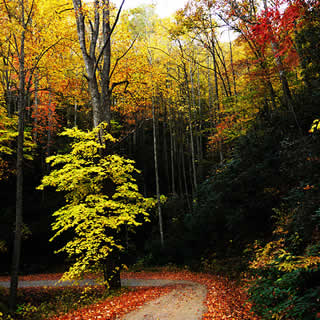 Follow Monticello Road for three miles through a rural residential area until it ends at N.C. 251. Along this road, notice the French Broad River as it makes its way west. The river was named for the French who inhabited this region during the 18th century. During the summer months, the French Broad River is a popular site for whitewater rafting and canoeing. Turn right onto N.C. 251 near the community of Alexander. Established in 1828, Alexander was named for the owner of a local stagecoach tavern.

This road, like many others in river valleys, was built following old Indian trading paths that led to trading posts and villages in the Tennessee and Ohio River valleys. Note the palisades, or sheer rock walls, that line the right side of the road. Over time, the wide river cut away at the rock valley walls. Migrating animals and American Indians used this passage to cross through the Eastern United States’ tallest mountains. When European settlers arrived, they also followed the river valleys and paths set by those before them and widened the paths into roads. With the arrival of trains, river valleys again provided the path of least resistance.

While following the French Broad River, a railroad is visible on the other side of the river. Near Marshall, the tracks cross the river and parallel the road.

Continue following N.C. 251 after it joins U.S. 25/70 Business into Marshall. Established in 1852 and named for former U.S. Supreme Court Chief Justice John Marshall, it is the Madison County seat. For the best view of the courthouse, turn left at the stoplight, cross the river, turn around in the school parking lot and re-cross the river to see this community perched upon the banks of the river.

Turn left at the stoplight in front of the courthouse to continue on the final portion of this byway. Follow U.S. 25/70 Business as it winds up the hill past a beautifully laid stone wall and meets with the U.S. 25/70 Bypass one mile later. The route ends here.

Located in some of North Carolina’s highest terrain, the Interstate 26 Scenic Highway in Madison County takes motorists straight through the heart of the Appalachian Mountains and offers stunning views, as well as engineering and environmental wonders.

Originally called Pleasant Hill, this area was first settled around 1790. The community grew up around the establishment of the French Broad Baptist Academy in 1856. In 1859, the school was chartered as Mars Hill College after a Biblical reference in Acts to a location the apostle Paul visited. The town itself did not receive a charter until 1893, changing its name to Mars Hill to reflect the influence of the college. Further information on the history of Mars Hill and Madison County is available at the Mars Hill College Rural Life Center, about one-half mile from the highway.

Continue on I-26 West and pass Exit 9, where U.S. 19 departs the interstate. Located two miles farther to the right, is the first of two scenic overlooks along the highway. In addition to sweeping views of the Madison County landscape, careful observers will spot the Blue Ridge Parkway across the valley and the tiny California Creek Church below the highway.

Near the overlook, but not visible from the interstate, is one of two wildlife passages constructed underneath the highway. These eight-foot by eight-foot concrete culverts allow bears, deer and other wildlife to safely cross the highway corridor without entering the roadway.

Continuing westward, the highway passes a N.C. Welcome Center, located alongside the eastbound lanes. The center was constructed to resemble a typical mountain farmstead. In addition to restroom facilities, travel information and vending machines, the center offers exhibits related to mountain life and culture. Inside the welcome center, travelers will find displays of local arts and crafts as well as an exhibit outlining the construction of this segment of I-26.

The second scenic overlook is also located at the welcome center. From the observation point, visitors can view Mount Mitchell, the highest peak east of the Mississippi River, as well as Black Mountain, Grandfather Mountain and the Blue Ridge Parkway. Below the observation area, visitors will find an educational display on the chestnut tree, which is indigenous to this area.

Passing the welcome center, the highway climbs until it reaches its highest point, Buckner Gap. At nearly 5,000 feet above sea level, this is the highest elevation on any interstate in North Carolina. Near the top of Buckner Gap is one of NCDOT’s  first monarch butterfly sanctuaries, which is not easily visible from the highway. The unique wildlife habitat was created to enhance the environment along the highway’s roadsides.

At mile marker three, the highway crosses the Laurel River near the Wolf Laurel community. This part of the state is known for winter ski resorts.  At 235 feet, the Laurel River bridge is the tallest in North Carolina. Because of its height and the severity of winter weather in North Carolina’s higher elevations, the bridge was designed with an automatic de-icing system. Careful observers will notice several nozzles on the bridge’s sides that are part of this system. The highway’s second animal crossing is also located 1.5 miles past the bridge.

At this point, I-26 approaches Sams Gap and the Tennessee state line. At the state line, there is a pull-off for truckers that provide information about highway safety and the runaway truck ramps located along the highway’s eastbound lanes. The Appalachian Trail runs under the highway through an underpass at the state line. A small parking lot was constructed here for trail hikers. Though the scenic highway ends at the Tennessee state line, travel five miles to the first Tennessee exit at Flag Pond to return to North Carolina.