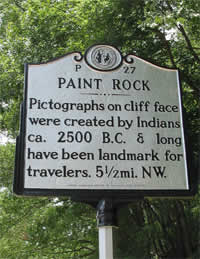 A significant rock outcropping, known as Paint Rock, can be found in Madison County very near the Tennessee border.

John Strother wrote about Paint Rock in his 1799 diary kept during his survey of the North Carolina-Tennessee boundary line: “Friday 28th. Set out very early and proceeded on the line about 4 m to the Painted rock on F. B. (French Broad) River, about 5 m below the Warm Springs; measured the height of the rock and found it to be 107 feet 3 Inches high from the top to the base; it rather projects over. The face of the rock bears but few traces of its having formerly been painted — owing to its being smoked by pine knots and other wood from a place at its base where Travellers have frequently camped — in the year 1790 it was not much smoked; the Pictures of some human’s — wild beasts fish & fowls were to be seen plainly made with red paint, some of them 20 & 30 feet from its base.”

During a visit to the area in 1796, botanist Andre Michaux mentioned a “red-painted rock.” A 1799 Tennessee border survey generated the first accounts of campfire soot obscuring some of the paintings. In 1859, an advertisement of a stagecoach line boasted it crossed “the Mountains in full view of the Painted Rocks.” In 1880 author W. H. Ferrel wrote that the “Indians colored portions of it with an indelible paint, which in places, yet remains fresh and red, presenting strange hieroglyphics that have never been deciphered.” 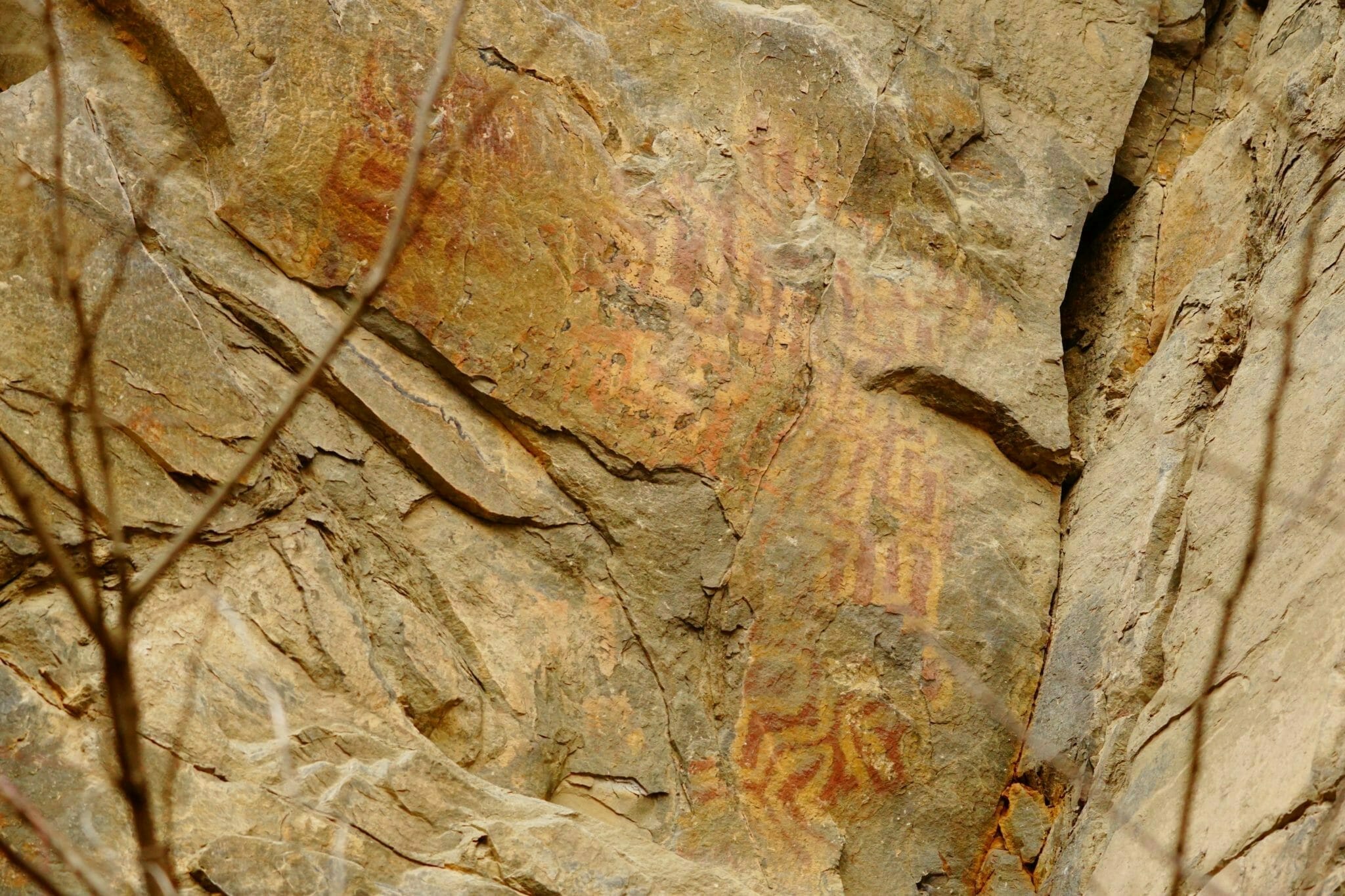 The topography at Paint Rock includes a gorge that prehistoric and historic travelers were compelled to use. The topographic gauntlet may be one reason why the pictographs were placed there. Whoever passed that way surely witnessed the rock paintings whether they were familiar with their function or not. The natural crossings of the French Broad River near Paint Rock, together with an old road immediately in front of the site, suggest that the area was part of a major route through the mountains for a considerable time. The strategic location could explain at least in part why six guards were stationed at a block house close to Paint Rock in the 1790s.

The North Carolina panel of Paint Rock (it straddles the Tennessee line) consists of alternating red and yellow rectilinear lines that are painted against a vertical cliff face. It is high above ground and below a slight overhang, thus in a triangle-shaped alcove, relatively well protected from wind and rain and extreme temperature fluctuations. Testing has indicated that the petroglyphs were created during the Archaic Period, about 5,000 years ago. The pigments were apparently of superior quality and of complex design, and the ingredients were clearly local.

A possible explanation for the creation of the art at Paint Rock might be related to the nearby hot springs. Indians were the first to use the 100-plus degree mineral water. Researchers have learned that rock art sites were important stopping points for Indians on their way to hot springs. Indians generally believed that the hot springs possessed healing powers and used the rock art sites as way points for prayer and contemplation on their pilgrimage to the springs. It could be that Paint Rock was such a locale on the way to the nearby hot springs.

Paint Rock is North Carolina’s best known example of an American Indian pictograph. The area has long been recognized for the painted murals, making it a local landmark with a rich historic legacy. The pictograph was incurring damage even during Strother’s time, due to campfires and weathering. Hurricanes in 2004 brought opportunity when relief funds supported archaeological projects including the formal recording of the North Carolina bi-chrome panel at Paint Rock. The National Forests in North Carolina contracted with rock art specialist Jannie Loubser to document the panel including assessment of condition, pigment dating and analyses, assessment of prehistoric context and significance, and determination of appropriate conservation and management actions. The 2006 examination of Paint Rock included mapping, photography, tracing, and the collection of three pigmented rock samples, which were used to determine the age of the pictograph and the origin of the pigments.