A Resort Destination Since the 1800’s

Hot Springs, North Carolina, a resort destination since the early 1800’s, has long been renowned for its healing mineral springs and scenic mountain setting. Native Americans were the first to discover the 100-plus degree mineral water from which the Town of Hot Springs received its name. They often held spiritual ceremonies about five miles down the French Broad River at Paint Rock where some of North Carolina’s best known example of an American Indian pictograph can still be seen today. Traders from the colonies came next and, by 1778, the lame and the sick were traveling over the mountains to the hot springs for the healing waters. On March 19, 1791, William Nelson bought the hot springs property for “two hundred pounds in Virginia currency” and began catering to the visitors.

Buncombe Turnpike was completed along the French Broad River through Hot Springs (called Warm Springs at the time) in 1828, connecting Tennessee and Kentucky to the east coast. It was the superhighway of the South at the time. Farmers drove thousands of horses, cattle, hogs, and other livestock to markets in Charleston and Augusta on the Turnpike and stopped in Hot Springs to take the waters along the way.

A Series of Three Hotels & The Railroad Arrives

Recognizing the potential for tourism, James Patton of Asheville, bought the springs in 1831 and by 1837 had built the 350-room Warm Springs Hotel with thirteen tall columns commemorating the first colonies. Because of it size and grandeur, it was called Patton’s White House. Its dining room could seat 600.

The next owner was James H. Rumbough, a stage coach operator, who bought the springs in 1862. In the hotel’s ballroom, second largest in the state, Frank Johnson, son of President Andrew Johnson, met his bride, Bessie Rumbough, daughter of the hotel owner.

The railroad reached the village in 1882, and it was necessary for Rumbough to enlarge his hotel. Two years later the hotel burned, and the springs and much of the town were sold to the Southern Improvement Company, a northern syndicate. 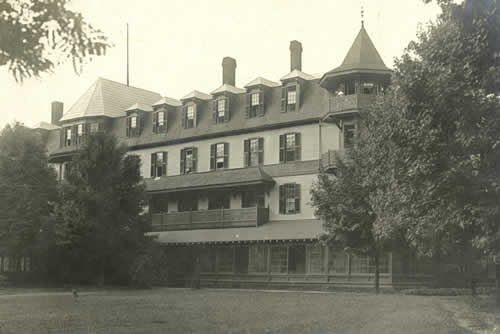 The Mountain Park Hotel was built in 1886, and a higher-temperature spring was discovered, prompting the company to change the town’s name from Warm Springs to Hot Springs. The Mountain Park was one of the most elegant resorts in the country during its heyday. It consisted of the 200-room hotel, a barn and stables, a spring house, and a bath house of sixteen marble pools, surrounded by landscaped lawns with croquet and tennis courts. The Mountain Park Hotel established the first organized golf club in the Southeast with a nine-hole course.

By May 1917, however, fewer and fewer people were taking the waters, and the Mountain Park Hotel and grounds were leased to the federal government as an internment camp for hundreds of German merchant sailors captured in U.S. harbors when war was declared. The internees were treated well by the townspeople, and several returned to visit after the war. 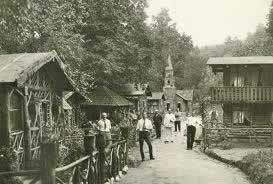 When the war ended, the Mountain Park Hotel never regained its former glory. The hotel burned in 1920, never to be rebuilt. Two other hotels were built on the grounds of the springs during the next forty years, but neither were as grand as the Warm Springs Hotel or the Mountain Park. Both of these smaller hotels also succumbed to fire, and the Town of Hot Springs was nearly forgotten as a tourist destination.

Hot Springs is again a haven for those seeking a relaxing and healthful mountain retreat. Outdoor recreation abounds. Hikers can explore some of the scenic stretches of the 2,100-mile Appalachian Trail, which runs down the main street of Town before crossing the French Broad River and climbing back onto the ridgetops. Rafters can shoot the rapids on the French Broad River. Mountain bikers can wind along wooded paths to open meadows with commanding views of the surrounding peaks. Those seeking time for relaxation can simply savor the area’s breathtaking scenery while soaking in hot mineral baths in secluded outdoor tubs at the reopened Hot Springs Spa.

The Growth of Tourism:  Warm Springs – Advertisement for the Warm Springs Hotel in Madison County, about 1880