A Ginseng Rhyzome Nexus in the Woods – Part 1

The mountains that nestle Hot Springs, similarly as a loving family ensconces a little one, contain some of nature’s richest diversity, both of animal life and, especially, flora of different sorts. Included in this wealth of plants are some of the most coveted growths among naturopaths in the know, especially the species Panax Quinquefolius, which we name ginseng, or in the local twang, “’sang!”

People hike or otherwise mingle with the forests for all sorts of reasons: for solace, for solitude, for beauty, for duties to nature and her pantheon of goddesses and gods. However, many travelers also have instrumental or cognitive reasons for turning to the trees as a place to wander and frolic. In this vein, the pertinence of ginseng to those who frequent the woods varies from ignorance to casual regard to scholarly concern to monetary interest.

The century-old volume, A History of Western North Carolina, in contextualizing varied practical rationale for woodcraft, illuminates “A Mysterious Floral Sisterhood” in relation to the beloved verdant being that ginseng is to many of its users. “In the ‘Carolina Mountains,’ we are told that in the Himalayas and the mountains of the Far East are found the flame-colored azalea, the silver-bell tree, the fringe bush, the wisteria, and ginseng, which are found nowhere else except in our own Appalachians.”

In a global realm today, the ginseng ‘marketplace’ constitutes over 80,000 tons per year, of which nearly sixty percent emanates from China’s ancient—and, for thousands of years sustainable—farms and forests. Much of present pondering of Blue Ridge ‘sang’ emphasizes this question of thriving over time, of expressing reliably renewable cultural practices to interact with ginseng and make available its beneficent qualities to those who want to imbibe it in one of its many forms.

Watch to find out about Robert’s healthy Ginseng growing methodology and some of the challenges with the Ginseng market.

Exemplifying this pattern of age-old engagement, over twenty Cherokee medicinals utilize dwarf ginseng, a relationship between nature and culture that stems from nearly a thousand years of use. These indigenous protocols, now listed and lionized by scientific methods, create therapeutic specifics that address wide-ranging ailments and complaints, in so doing showing visitors to humble Hot Springs the eternally horticultural wellsprings of the devices that culture creates for wellness. In different times and places, therefore, the genus Panax has intersected with the genus Homo in helpful and almost magical fashion.

Recent publications reveal the unexpected, truly global, extent of the attention that this shy little growth has been eliciting as a result of this interpenetration of conscious humanity with its vegetative surroundings. “China’s Gold Rush in the Appalachians” appeared as a lengthy feature in the pages of Foreign Policy magazine, homing in on nearby Boone and the surrounding Pisgah National Forest, which in turn constitutes between seventy and eighty percent of Madison County’s landmass. Both the History Channel’s Appalachian Outlaws and a National Geographic TV special, “Smoky Mountain Money,” also highlight this enthusiasm, which in some cases has become greedy and destructive, almost an obsession. 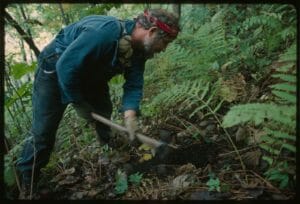 Moreover, this attentive fascination has persisted for millennia. Ginseng’s role in Cherokee and other First Nation pharmacopoeias is well-established; human proclivities to sample nature’s wares means that ginseng’s salubrious use undoubtedly predates even these relatively ancient practices. Asiatic reliance on cousins of America’s species unveils that, furthermore, this very specific intersection between botany and primates dates back, at a minimum, many millennia before the current era.

More prosaically, none other than John Jacob Astor, one of Anglo-America’s original moneybags, in perhaps his first shipment to China in the late 1700’s, included among the wares that he sent for trade thirty tons of ginseng, for which he receive $55,000. Early plutocrats already noted and mined the rooted value of such non-traditional ‘crops,’ so much so that here in America, ginseng’s reproduction and European extractive methodologies have often created at best a fragile balance between compulsive consumption and long-term availability.

So much for a rapid-fire update about a much-coveted, if not altogether prepossessing, plant. Peeling back the surface veneer of knowledge about ginseng, the investigator discovers a vast network of interrelation and interdependency, as if the rules and regulations of the forest itself had inserted themselves into our endeavors. Anyhow, this culminates Part One: Parts Two, Three, Four, and, finally, Five proceed in due course.