StoryCorps is a non-profit organization that began in 2003 to capture conversations and stories of people around the world to help build connections between people and create a more compassionate world. The StoryCorps Archive comprises one of the largest digital collections of human voices. The full collection is housed at the American Folklife Center at the Library of Congress in Washington, D.C. Locally the Madison County Public Library and Friends of the Hot Springs Library have worked to ensure residents’ stories are collected as part of this oral history project, sharing with fellow locals and the rest of the world. 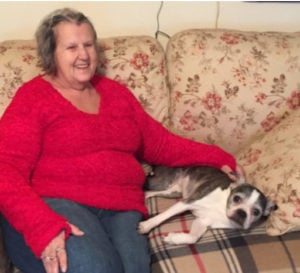 She shares stories of her early years growing up with her brother Charles, playing Eevy Ivy Over in the yard, jumping rope with her Mom Elsie, and hiding in the drain pipes while playing hide and seek at night with friends and family.

With her grandmother and grandfather just across the road, Mary said she would spend days away from home with them. She said Mamaw would make her and her friends a pan of cornbread and Papaw would take them for a hike into the holler near the plant where they’d eat Indian turnips, persimmons, and cornbread. They later named the holler after her Papaw, a preacher who everyone called Austen, and so they called it Austen Holler in his honor. She shares memories of him crossing the creek on his boat with his pet cat and a snake around his shoulders and how they’d do what was called “snaking in wood,” dragging out logs down to their boat to carry home for their wood-burning cookstove.

Hear more of Mary’s stories growing up in Hot Springs through the years on StoryCorps HERE. 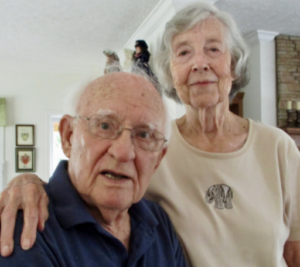 Bill and Waco Culbertson– Bill Culbertson was born in 1928, one of nine children in a home his father built in Spring Creek, North Carolina. His mother later sold the home and the 186 acres to her cousin and they moved to Hot Springs in 1940.

He shares stories of Dr. Kimberly sewing his arm after falling onto a roll of barbed wire at his father’s shop and helping his friend after being bitten on his toe by a copperhead. He reminisces on a time when he fell into the creek one afternoon and nearly swam to the river and the early baptisms that took place there and along the riverbank. Bill loved baseball and played as a catcher for Hot Springs School after spending a few years at Warren Wilson.

He talks about riding on the fender of a car with a friend up to White Rock just to play ball. Bill joined the Air Force after school with a friend where he joined active duty during WWII in the Philippines. He returned to Hot Springs three and a half years later and married his wife, who have shared life together 68 years and counting. They built a house by the Grove Park Inn, later moved to Arden to live on 12 acres by the river, spent a short time in Florida, before moving back to Hot Springs to settle down and build a home.

Hear more of their stories on StoryCorps HERE. 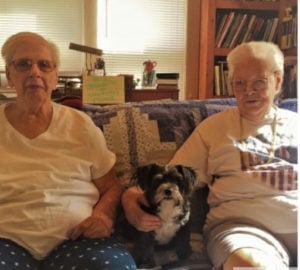 Sisters Margaret and Sue– Sue was born in Hot Springs in 1932 and reminisces on early years at Hot Springs School and Warren Wilson College where she played basketball and worked to pay for tuition. She later went to work at the telephone company and married her husband Floyd Collins, a truck driver, and they spent winters in Florida together before he passed and she moved back to Hot Springs.

Margaret was born in 1942 and graduated from Hot Springs High School in 1959, the largest graduating class from that school with a class of 29. She was a cheerleader, basketball player, and singer in the Glee Club amongst many other things. She went on to attend Brevard College and Appalachian State University where she received a BA in Education and went on to teach for 32 years at Spring Creek, Rosman, Black Mountain and Owen Middle Schools. She retired in 1985 and says she’s enjoyed every minute of it, cooking evening meals at Laughing Heart Lodge, a Jesuit Retreat Center and hiker hostel just off the Appalachian Trail.

They reminisce on stories their mother told on washing clothes in the creek, boiling water in a pot to finish, and hanging them to dry and their father’s early days growing up on a farm in Sandy Mush while his brothers fought in WWI. Sue shares an early memory spending time around their barn with the cattle and chickens and one of her brothers giving her a dose of turpentine, which she’s thankful to be alive to tell.

Hear more of their stories on their favorite Christmas stories, their chores growing up on their small farmstead, and more on StoryCorps HERE. 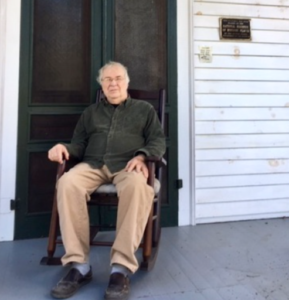 Elmer Hall– Elmer shares his story of hiking the Appalachian Trail into Hot Springs in 1976 on sabbatical from his work running a vegetarian restaurant in Durham, N.C. He stayed at the Sunnybank Inn as a hiker and got to know the Gentry family, who were running the Inn at the time before finishing his hike. He later decided that he wanted to simplify his life and return to the mountains and worked for the Gentrys until he later purchased and took over the historic home.

Just over 40 years in Hot Springs, he reminisces on the changes he’s seen the town go through in his time. He shares his love for Bluff Mountain as the crown jewel of Madison County and how the forest service and logging industry put forth initiatives to clear cut the forest there many years ago. He and a small group of locals joined together to protest the clear cutting and created the Bluff Mountain Alliance to stall their plan in harvesting the natural resources locally. “Don’t Cut Bluff” was their slogan and rally cry and the Bluff Mountain Music Festival was born to help support that cause.

Hear more about the artists involved in the festival through the years, how hikers helped with the demonstrations, and more on StoryCorps HERE. 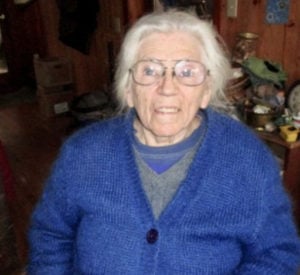 Camille Shafer– Camille was born in Normandy during the middle of WWII. When she was just two years old, she had a terrible accident where a booby trap exploded in her hand, leaving her with only one hand for the rest of her life. Her mother made the difficult decision to allow her to leave home and go to a school run by the Red Cross made for children hurt in WWII until she was ten years old.

She went on to attend a boarding school, finish high school and began traveling and going to movies, theaters, and museums. She later continued her studies in art, graduating in 1968 during the French Revolution. She recalls printing the posters for the revolution and people coming to bring her sandwiches and do her laundry as she worked. She decided at 26 that she wanted to travel to Brazil, yet couldn’t visit another country easily so she went to Canada instead to teach art. She went on to travel and live in Paris with a friend who went to Ohio and then convinced Camille to move to the United States where she would meet her future husband.

Hear more of Camille’s story traveling from Canada to New Mexico to the Appalachian Mountains in Sandy Mush where she fell in love with a log cabin and the land surrounding it before finding Spring Creek and starting the artist residency Azule HERE on StoryCorps. 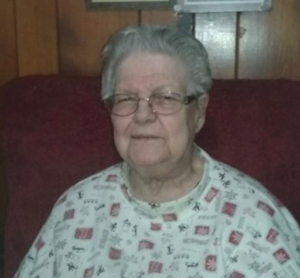 She lost both of her girls to cancer later in life and says the Lord must have needed them more. She went on to lose her husband not long after and her sister passed in a car accident. Agnes recalls earlier years of she and her husband farming tobacco, raising cattle and a garden, and canning everything they could. They were married 63 years and shared a good life together.

When she was small, she and her ten brothers and sisters stayed with her grandmother and grandfather. She recalls a rough life growing up, but fell in love with Lionel, her husband the first time she laid eyes on him. Even though her family didn’t like him, she said they worked hard and made a good living together. She recalls getting married on $25 in Newport, T.N. and going on to live for a while with his mother before they could sell enough tobacco to afford the nails to rebuild their home. 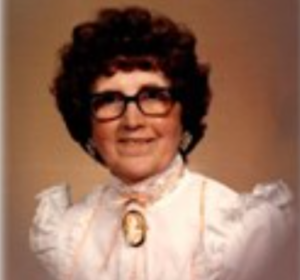 Della “Hazel” Moore– Hazel Moore was born in Johnson City, TN in 1922. She went to business school early on yet felt too far from home so she moved back home and began to take a train for course-work at Asheville Beauty Academy. She recalls taking the Carolina Special train, a $1 round-trip ticket, that took her into Asheville and the #27 that carried her home.

She recalls her oldest brother William going into the service during the Depression and her father’s days milking cows near the plant in Hot Springs in the late 1920’s. As an author of several books on the town, she is known around the country as the Town Historian. She recalls an early teacher who inspired her, the Glee Club she was part of, and how alive the town was with young children and families.

She worked in a beauty shop in downtown Hot Springs, which shared a building with a grocery, just across the street from Bluff Mountain Outfitters today. She says there were many clubs in town and she joined the Finer Carolina program where they won $1,000 and bought the building where the community center is. She later began Hazel’s Beauty Shop, which she ran over 60 years. She recalls working at the Hot Springs Library for seven years at $4/hour for two days a week at the library and two days a week at her beauty shop.

Hear more of Hazel’s stories growing up in Hot Springs until she passed at 96 years old on StoryCorps HERE. 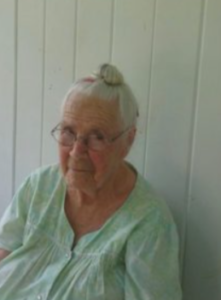 Lora Thomas– Lora was born in 1914 in Grassy Creek on the Tennessee state line. She recalls early years leading the way to pick black huckleberries, wading through the water to get to the woods. She lived there until she was 15 years old, walking a mile to take a bus for school in Hot Springs. She had one sister Sandy and three brothers. She recalls her family’s early years working on the road connecting Spring Creek to Hot Springs.

She was 30 years old when she got married. She said they walked from Grassy Creek to Paint Rock to do the washing and she spent her time digging roots and picking berries. She remembers making $1/day washing clothes and 50 cents/gallon selling berries.

Hear more of her stories on catching the train to Marshall by Paint Rock and chewing tobacco straight from the barn on StoryCorps HERE.